Recording an effect to a Cue

Recording an effect to a Cue

Effects are created in the Programmer window and then Recorded to a Cue/Cuelist for playback later.

When you have created an effect that you want to save for playback later, select the red Record button at the top of the Programmer window to bring up the Record Cue dialog. 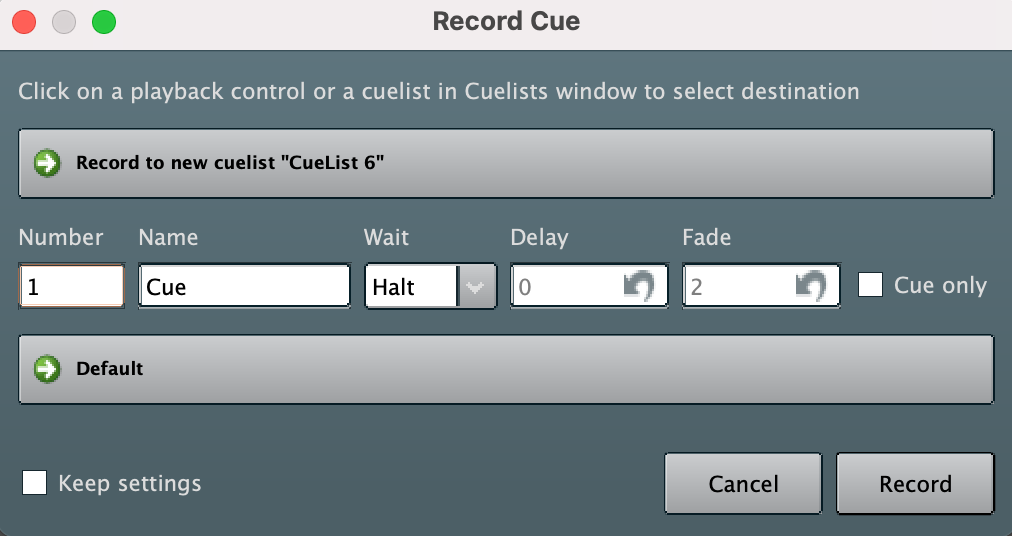 To record the Cue to the default Cuelist name provided ("CueList 6" as shown in example above) with the default Cue properties, just select the Record button and the Cuelist will be created with a single Cue and will be visible from the Cuelists window.

The default settings for a new Cue are shown and editable from the Record Cue window as follows, all of these options can be edited later if required from the Cuelists window:

However additional options are available with the following purpose:

Once a Cue has been recorded to a Cuelist, the option to simply Append any new Cue to the Cuelist becomes available. Once the next effect has been set select the Append Last button at the top of the Programmer window (to the right of the red Record button) to automatically record the new Cue to the last recorded Cuelist. If you hover over the Append Last button with the mouse, a tool tip will tell you which Cuelist will be appended to.

By entering and using this site, you consent to the use of only necessary cookies to enhance your site experience and improve our services.